Today’s link is an interesting blog describing an Australian who is a huge Civil War buff. As a Canadian who’s had a lifelong interest in the war, I’m not surprised there are others in the world with as strong an interest. One of my favorite tasks in keeping this blog is monitoring where my visitors come from.  Proof that this is a worldwide topic, this is my map as of this morning: 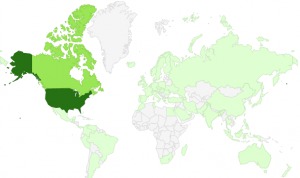 A few conversations with Len mean I now retreat apologetically if anyone welcomes me as a Civil War buff. It turns out he is regarded by many as the doyen of the Australian enthusiasts. The Atlanta History Museum, which I’ve visited, bought most of his private museum. A fellow collector of war mementoes, Andraus Tonismae, says: ”He astounds me. I’ve never come across such amazing recall. It is a steel-trap mind. And he had the best collection of artefacts outside the US.”

Seventy-five-year-old Len seems to know everything that happened in America from 1860 to 1865.

He acquired this knowledge, his collection and a library of 1800 books on the war, while he slapped gun-metal grey on the steel framework of the Sydney Harbour Bridge or embossed gilt in art deco cinemas and offices. For 20 years he was a painter and decorator. Later he became a paint salesman, then a workplace inspector.

His story proves, in his words, that ”the Civil War belongs to the world”. It probably proves something else as well: the enchantment of history, that all can fall in love with the sequences of the past, even if you spend your working days hanging wallpaper or staining and polishing. His life is about the power of self-education in a subject you love.

via Love is a battlefield.