I hope Santa is good to you. 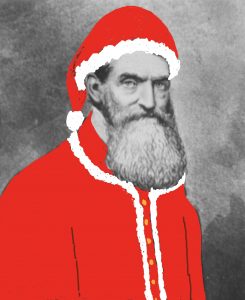 To celebrate a Civil War Hallowe’en, these parents have gone all out: Their wheelchair-bound son with cerebral palsy is going as a Lincoln Memorial snowglobe, complete with bubbles as “glitter”. Hard to top that in the costume competition!

This is an interesting solution to the Confederate statue question: One community sold a monument to a private investor, and made a tidy profit on it! The likenesses of Confederate slaveowners being sold on the auction block is an ironic turn of events.

Now, one city has settled on an unusual answer: Sell the statue to the highest bidder.

Dallas, unable to find a suitable new home for a bronze statue of Robert E. Lee on horseback that had sat in a city park until 2017, recently sent the artifact to an online auction. It sold for more than $1.4 million, with one crucial condition: The statue cannot be displayed publicly in the Dallas-Fort Worth metropolitan area.

Source: What Should Happen to Confederate Statues? A City Auctions One for $1.4 Million – The New York Times

While not strictly Civil War related, this book – reviewed here in the NY Times – shows the legacy of at least one die-hard secessionist upon his daughters. This sounds like a fascinating family history.

These are just snapshots of a densely braided biography spanning eight decades, not counting the Lumpkins’ forebears and the rediscovery of the sisters’ work by late-20th-century feminists. The book also draws together the strands of Hall’s own career as a distinguished historian of Southern labor and an activist on behalf of women and civil rights.

Hall is a herculean researcher whose sources include security files she sued the Department of Justice to access. Her interviews with the elderly Lumpkins, and reflections on why and how she tracked the sisters over decades, lend an appealing journalistic and personal touch to what might otherwise be an unleavened diet of detailed scholarship.

Source: The Daughters of the Confederacy Who Turned Their Heritage to Political Ends – The New York Times

There’s a new novel about Harriet Tubman. Tubman’s daring raids into Confederate territory to rescue slaves and scout for Union armies are the perfect fodder for an adventure novel. I’ll have to see if I can pick this one up at some point!

A historian and novelist, Cobbs dramatizes events from late May and early June of 1863, when Union forces, not long after some demoralizing failures, made a raid up South Carolina’s Combahee River, attacking plantations and liberating hundreds of slaves. Under her popular nickname “Moses,” Tubman is known to have led scouting missions ahead of the attack, in addition to her ongoing role of recruiting freed Black Americans to the Union cause.

Happy Confederate defeat day! Admittedly, it took another two years before the capitulation was complete, but the seeds of that Union victory were sown on July 4th, 1863. Lee began his retreat to Virginia after Gettysburg, and Grant wrapped up the siege of Vicksburg.

While the two forces at Gettysburg spent the Fourth of July in relative peace, staring at each other across blood-soaked fields and woodlands, General Ulysses S. Grant’s army captured the fortified town of Vicksburg in Mississippi. After enduring a siege of more than 40 days, Confederate General John Pemberton surrendered his army of almost 30,000 men to Grant.

Source: These Honored Dead: Paying Homage to Our Past

As they watch modern day Washington with a wary eye, Impeachment proponents can find some aspirational reading in a new book about Andrew Johnson’s proceedings. The Guardian reviews it here.

Implicit or not, parallels abound with current American life. Johnson’s “Swing Around the Circle” railroad trip featured rallies at which his language was (at best) strong and intemperate, including personal attacks on Congress. During the trip, the president even told a supporter: “I don’t care about my dignity.” Senator John Sherman of Illinois complained that Johnson had “sunk the presidential office to the level of a grog-house”.

Unsurprisingly, analogies to the current situation are emphasized, however subtly, throughout Wineapple’s book.

The author writes that “the highly unlikeable President Johnson was impeached … by men who could no longer stand his arrogance and bigotry, his apparent abuse of power, and most recently his violation of law.”/blockquote>

Source: The Impeachers review: Andrew Johnson and the men who nearly trumped him | Books | The Guardian

As with a few of their other holdings, the Lincoln Presidential Library’s new Bible acquisition is of dubious connection to the man. He may have thumbed through it once or two, but an eighteen pound Bible is not really a book that lends itself to light reading. (Pun intended. Also, eighteen pounds?!)

A Bible given to Abraham Lincoln in the final months of the Civil War ties together the 16th president’s budding views on spirituality and his belief that God was calling him to end slavery as well as his widow’s labors to solidify his religious standing, historians say. The King James Bible was eventually given by Mary Lincoln to Noyes W. Miner, a beloved Springfield neighbor and a Baptist minister whose descendants donated it to the Abraham Lincoln Presidential Library and Museum, which unveiled it to th

Another local story, this one dedicating a local square in the name of a USCT soldier. This article added an interesting point about slave names that I’d never considered before.

But when enlistment opened for men of color in Cape Girardeau, the Army wants you to have a first name and a last name. And in the course of the study that I’ve looked at, over 200 men who enlisted in Cape Girardeau, it was pretty typical that they, maybe by default, or you know just the pressure of the moment when they stood in front of the enlistment officer, they needed a first name and a last name. And so most of them chose the last name of their last enslaver.

Source: Remembering James Ivers: A Look Back On The Story Of A Slave-Turned-Soldier In The Civil War | KRCU