A trip down the Wikipedia wormhole led me to the Great Seal of the Confederacy page. I don’t think I’ve seen this before, though given that the seal couldn’t properly be used it’s unsurprising. And here’s a neat little bit of trivia that shows how effective the blockade became: The official press never made it to the Confederacy, and can now be seen in a museum in Bermuda, which is as far as it got in shipment. 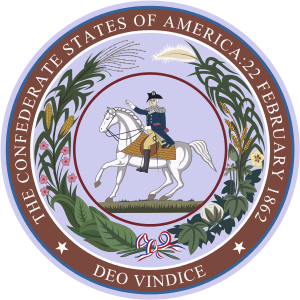 Great Seal of the Confederate States of America – Wikipedia, the free encyclopedia.