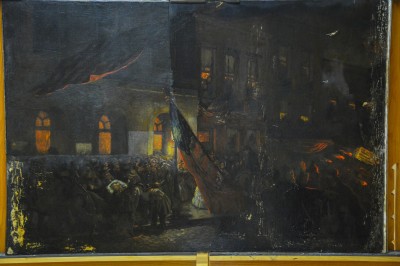 Pictured above is a painting – thought to be the only one done by an eyewitness – of Lincoln being carried out of Ford’s Theatre. Nice to hear that it’s being restored with the intention of hanging it in the Theatre museum, and interesting to read about the history of it – it seems to have been a painting no one wanted to see.

The painting, in oil on canvas, has been in family hands and in storage for much of its existence — perhaps because the scene it depicted was too painful, some believe. It belonged to the White House for a time, but it’s not clear whether it was ever displayed. Since 1978, it has been in the hands of the Park Service, and lately it has been in storage in the service’s Museum Resource Center in suburban Maryland. It was last exhibited four years ago in Russia, at shows comparing the lives of Lincoln and Cz

Source: Lincoln assassination emerges in painting from 150 years of grime – The Washington Post