A little biography of Tim O’Sullivan, which includes a few instances of his post-war photography. Modern critics rail at his manufacturing of the Civil War shots, but you can’t complain about those American West ones. Absolutely stunning.  I’ll need to hunt down some O’Sullivan photo books to add to my collection.

In 1867, the War behind him, he used his fame to become the official photographer for the U.S. Geological Service’s “Exploration of the Fortieth Parallel.” The purpose of the exploration was as much political and promotional as it was scientific. The U.S. was stretching across the continent and the government wanted people to settle the heartland. O’Sullivan’s task was to create photographs to sell the West, and induce Easterners and foreign immigrants to settle in the new American territories.

Setting out from Virginia City, Nevada — a town that would later be immortalized in movies and TV series, including “Bonanza” — O’Sullivan headed into the Southwest. With boxes of glass plates and a wagon full of chemicals, he made photographs as he traveled using the wet plate collodion process. This process requires the photographer to coat the glass with a syrupy concoction of light-sensitive chemicals and make the exposure while the plate is wet. This means that wherever he went, he brought his darkroom — an old, horse drawn military ambulance fitted out for photographic processing — with him. Despite its difficulties, the wet collodion method served O’Sullivan well because it produced the highly detailed, grainless images he was after. 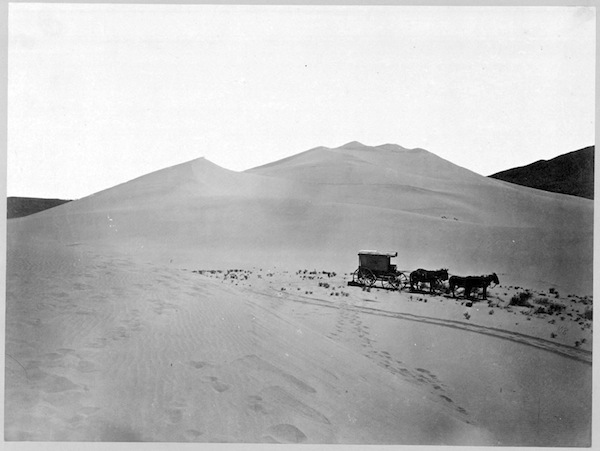 via How the American West was won with the help of photographer Timothy O’Sullivan – Imaging Resource.