I wouldn’t normally comment on a story like this, but the accompanying image struck a chord.  Kudos to the relic hunter who selflessly turned it over to the family.  As his descendant is also a veteran, I bet the gesture was all the more appreciated.

The ring was worn by Levi Schlegel, a Reading-area native who is believed to have lost it nearly 150 years ago at an encampment near Fredericksburg, Va.

Relic hunter John Blue found the ring at a construction site in 2005. Though it was engraved with Schlegel’s name and unit — ‘‘Co. G., 198th P.V.,’’ or Pennsylvania Volunteers — Blue wasn’t sure how to find Schlegel’s descendants, and kept the ring in a box for several years.

A genealogist ultimately helped Blue track down Schlegel’s family. On Tuesday, Blue presented the ring to a distant cousin during a ceremony at Levi Schlegel’s grave in Reading. 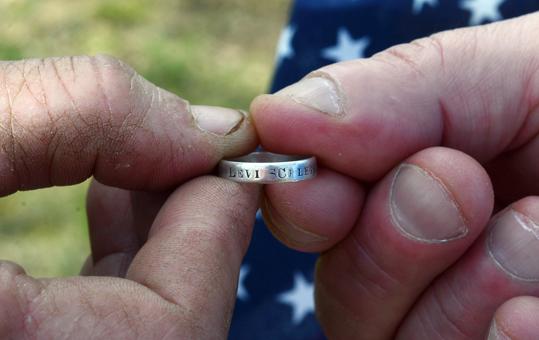