I was on the fence about this link, as the article it leads to is rife with ads, and won’t let anyone with an adblocker access it before the adblocker is disabled. But it’s beautifully designed, and I like that the newspaper is making use of its archives to give citizens a glimpse of their state’s past.

The accounts of the assassination hit The Montana Post in its Saturday, April 29, 1865 edition…

The Montana Post, squarely Republican in its leaning, was doleful and respectful in tone, chronicling the reaction of the community. Yet, the Post and its politics were almost certainly in the minority. Virginia City had originally been named “Varina” after Confederate President Jefferson Davis’ wife. Vigilante, tax assessor and first superintendent of Yellowstone National Park Nathaniel Pitt Langford recalled that most people around Virginia City were secessionists, “more disloyal as a whole than Tennessee or Kentucky ever was.”

The modern conclusions drawn here are very questionable, but the Civil War history was pretty edifying: I knew that Lincoln had pushed through the statehood for a couple of states, but the political impact had never been fully clear until reading this.

This largely forgotten act of line-drawing enabled one of the most consequential gerrymanders in American history. Because the virtually unpopulated Nevada became its own territory, Republicans could admit it as a state just four years later. That gave the Party of Lincoln two extra seats in the Senate — helping prevent Democrats from simultaneously controlling the White House and both houses of Congress until 1893.

Nor was this selective admission of the Republican state of Nevada an isolated case. Among other things, the reason why there are two Dakotas — despite the fact that both states are so underpopulated that they each only rate a single member of the House of Representatives to this day — is because Republicans won the 1888 election and decided to celebrate by giving themselves four senators instead of just two.

Source: The forgotten history of how Abraham Lincoln helped rig the Senate for Republicans – ThinkProgress

So it turns out Utah’s constitution still allows for slavery, “Except as a punishment for a crime.” This legal loophole was explored in great depth in the excellent Douglas Blackmon book, Slavery By Another Name. (The book was the basis of a PBS documentary, too.) A hundred and fifty plus years after the war ended, it’s amazing to note how slavery’s tendrils are still wound around American laws.

After the Civil War, former slave states leapt to take advantage of the exception carved out by the 13th Amendment, the ACLU of Colorado explained last year in its case for amending the state constitution. African Americans were imprisoned and forced to labor in convict leasing programs that pumped money into the state coffers; more than 70 percent of Alabama’s revenue came from the practice in 1898, the ACLU reported.

There’s a battle going on at the Minnesota state capitol: Turns out some really beautiful canvasses were removed for restoration, and the discussion is now ongoing over whether to replace them with more modern and inclusive artwork. I am a little torn; I am all for modernizing and inclusive-izing the artwork, but one of the paintings at issue is this incredible work by Howard Pyle, “The Battle of Nashville”.  Here’s hoping Minnesota can find some room over its mantel for this excellent and moving piece. (And if they can’t, I’ll happily rehome it!) 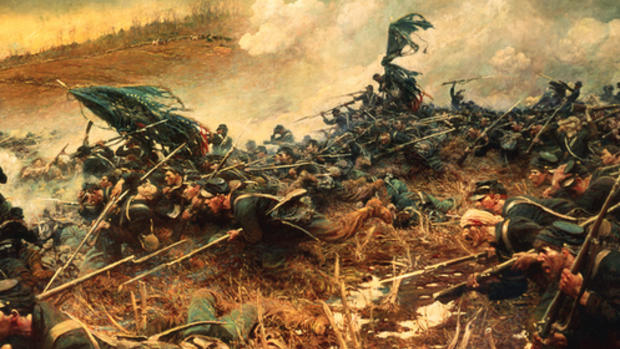 I do love the ripples in the pond effect of the war across the globe. Here’s a ripple I hadn’t considered before, though: The war’s influence on Hawaii. Turns out there were soldiers from there, and sectional arguments as well. With Union-impressed ships and Confederate privateers on the prowl, the war diminished Hawaii’s trade.

Two former residents of Malumalu, Kauai served as officers of the North — William Reynolds as a Union Navy officer and James Marshall, the first manager of Lihue Plantation, as a Union Army brigadier general…

Kauai was not, however, without its southern sympathizers…

I’ve always been fascinated by the westward expansion after the war, though my focus was always on the Missouri guerrillas and how they laid the shaky foundations of the Wild West. The more sedate yet lasting effects regular immigrants caused hadn’t much occurred to me.

Among those profiled were James, William and Charles Conrad from the Shenandoah Valley in Virginia. James and wife, Maria, raised 13 children on Wapping Plantation, home to 11 slaves. James Conrad and sons William, 16, and Charles, 14, served the militia, in the boys’ case, with guerrillas.

They returned from the war to find their slaves freed and their plantation in ruins, unable to support the large family. William and Charles eventually moved to Fort Benton with a single silver dollar, according to family lore. They built a business empire on the frontier.

“Confederate veterans were in on discovery of most of the largest strikes,” Robison wrote. “Songs ‘Dixie’ and ‘Bonnie Blue Flag’ were on the ‘hit parade’ in the hurdy-gurdy dance halls of Virginia City, and the assassination of President Abraham Lincoln was cheered and celebrated on the streets. When ex-Confederate soldiers formed Gallatin Masonic Lodge No. 6 in October 1866, they refused admission to African-Americans, which was not surprising, but they also refused to admit whites who had fought for or supported the Union.”

via ‘Dixie’s loss is Montana’s gain’.

I’ve started my Civil War year by listening to Gary Gallagher’s excellent Teaching Company lectures (more about these later). One of the themes he emphasizes is how the border states were dragged into the Confederacy by their richer, more extremist Deep South cousins.  Every Confederate state would have at least some Unionist supporters, and some had significant pockets of disgruntled residents.

The History Channel deviates from its new mission of pawn shops and storage container auctions to give us this excellent primer to those who were in rebellion to the rebellion.

It wasn’t unusual for Americans to have conflicting loyalties during the Civil War. Northerners were often sympathetic to the Confederate cause, and many poor, non-slaveholding regions of the South were equally reluctant to join the rebellion against the United States. These “Southern Yankee” hotbeds supplied thousands of troops to the North, and some even went so far as to declare neutrality or secede from the Confederacy altogether. Below, learn the unusual stories behind six Civil War-era Southern territories where Unionist sentiment was most widespread.

via 6 Southern Unionist Strongholds During the Civil War — HISTORY Lists.

Here’s a quick look at South Carolina’s addiction to cotton.  Like other kinds of junkies, its love of the white stuff led it to make rash decisions and sacrifice its future.  By the looks of it, the effects of the Civil War are still plaguing the state.

“The story of cotton itself is as interesting as the stories about its place in American history,” Cox said.

That includes cotton’s role in the Civil War. Thanks to cotton, U.S. Census data ranked South Carolina third in wealth among the states on the eve of the war. With most young men fighting, cotton production fell 96 percent during the war. And since then, South Carolina has consistently been in the bottom 10 in per capita income in the U.S.

The state’s fortunes were tied to cotton long after the war. In the 1880s, some cotton farmers went from the richest men in the state after boom years with good weather to bust in just a few years when drought returned.

via BISHOPVILLE, S.C.: Cotton may not be king, but it’s still vital to SC | State | The State.

Like Wisconsin, Indiana was a Union-heavy state that contributed much in the way of men to the cause. They didn’t contribute many colored troops, though, because according to this article Indiana was quite hostile to blacks.  There is even the rumor of native black troops being poisoned.

The young Townsend, from Putnam County, bought a pie from a peddler selling them in Camp Fremont in Indianapolis where the 28th USCT was mustered in.

“I don’t know for sure, but the abolitionist press reports lots of stories in the Civil War about people deliberately selling poisoned foods to black troops,” Etcheson said. “He gets really ill and has to go back to Putnamville, where he dies in the spring of 1865. I don’t know what the illness was, but pension records link it to the pie.”