I was lucky enough last summer to be able to accompany the ACWRTUK on their field trip to Cherbourg.  The London round table was dauntingly well read and many of the members had a depth of knowledge that I felt would translate well to books.

Turns out one of the members has written a book, and it’s a subject that touches close to home for me, as I’m the child of Glaswegians and the grandchild of a Glaswegian shipbuilder: The Clyde-built ships that served the Confederacy.

Looks to be a fascinating read. I’m adding it to my wish list!
Clydebuilt: The Blockade Runners, Cruisers and Armoured Rams of the American Civil War

A museum director appears to have unearthed the remains of a Confederate “sub base” in Louisiana. I’ve read about the David and the Hunley, but had no idea there were others in the “fleet”. Fascinating discovery!

There’s evidence the Shreveport subs existed. Reports of Union spies in Shreveport, as well as Confederate reports, detail the appearance and dimensions of the submarines as well as operations to put mines in Red River for a Union invasion that never came. Five submarines were built, with one sent to the Houston/Galveston area in Texas, and lost in transit. The late historians and authors Eric Brock and Katherine Brash Jeter did considerable research on the subs and the Confederate Navy Yard and found documentation a number of machinists and engineers who had built the Hunley and other submarines for the South were in Shreveport the last year of the conflict.

This interesting piece of what-if history discusses a scuttled Confederate plot to target Northern shipping ports on the Great Lakes. My first reaction was to scoff at how little impact one steamer could have, but then I remembered The Alabama.

There was, however, an opportunity. In order to avoid an arms race on the Great Lakes, in 1817, the United States and Britain agreed to demilitarize them. In the Rush-Bagot Agreement, both nations agreed to maintain only a handful of small armed vessels on the Great Lakes and Lake Champlain. By 1863, there was only one American warship on the Great Lakes: the 14-gun steamboat USS Michigan, which is pictured above.

If the Confederate Navy could hijack the Michigan and crew it with skilled sailors, it could ravage American forces on the Great Lakes unopposed by the United States Navy. 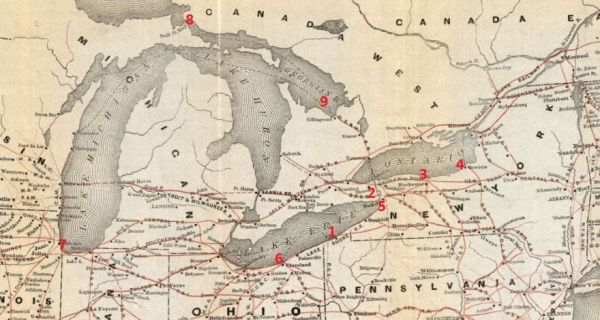 via The Confederate Navy’s Crazy Plan to Raid the Great Lakes – Neatorama.

I noticed this TV show announcement a few weeks ago; it looks interesting. Hopefully the PBS networks all share broadcast times, as this one was for New Mexico.

…in 1861, those same rivers and rails that had transported prosperity to Tennessee and the South became lifelines for moving men, ammunition and supplies in a war that split the nation. Ultimately whoever controls the rivers and the rails in the Civil War wins the war. This explains why most of the battles in Tennessee took place near the state’s rivers and railways.

via Rivers & Rails: Daggers of the Civil War airs on Thursday, the 12th at 9 pm | KENW.

There was a neat find near Savannah this month:

Archeologists working for the Army Corps of Engineers, Savannah District, aided by divers and salvage operations teams from the Navy, retrieved a 64-square-foot section of a Civil War ironclad warship from the bottom of the Savannah River, the evening of Nov. 12.

The divers worked in strong currents with near-zero visibility during a week to assess the possibility of lifting a small piece of the Confederate ship’s casemate for archeological testing.

A crane lifted it onto a barge anchored near historic Old Fort Jackson on the eastern edge of Savannah.  Experts estimate the piece weighs more than 5,000 pounds.

FIVE THOUSAND POUNDS. For a “SMALL PIECE… of the casement.” This helps put the ironclads into some more perspective, though clearly I need a lot more to fully grasp how heavy these behemoths were.

This is the interesting story of a blockade runner with a full c.v. From its christening in Glasgow to its suspicious scuttling outside Oregon, the ship has an interesting history. Some of the war’s inanimate objects have some interesting stories to tell.

Ten days into its new career as a Navy ship, the Gertrude captured the blockade runner Warrior after a nine-hour chase. Then it sank the Ellen the following January, followed the next year by the Eco. The Gertrude’s brush with stardom came when it almost caught the legendary Confederate runner Denbigh, which only managed to get away by pitching $10,000 worth of cotton overboard to lighten the cargo load.

After the war, though, the Gertrude’s glory days were over. Technology had raced ahead in the few years since it was built. What had been the fastest thing in the Gulf of Mexico back in 1863 was now just another aging, slowish, tiny, obsolete freighter.

Now re-named the Gussie Telfair, the old warhorse soldiered on for twenty mundane years making the Portland-Victoria run before finally being sold to Frank Bernard and put to work out of Coos Bay.

And that, of course, led to what was very likely an undignified little bit of dirty work in the line of insurance fraud, and the end of a once-proud warrior that had done a yeoman’s job on both sides in the war of the century.

There’s a ceremony being held at Arlington this week for two of the sailors recovered from the Monitor’s deep sea wreck.  Possible descendants of the sailors are being DNA tested against the remains. Forensic reconstruction artists have given us a peek at what these men looked like; bringing the dead back to life just in time to bury them again.

The ceremony Friday at Arlington National Cemetery in Washington will include Monitor kin who believe the two sailors – whose remains were discovered in 2002 – are their ancestors, despite DNA testing that has failed to make a conclusive link. But the families stress that the interment pays homage to all 16 Union sailors who died when the ship went down, and nearly 100 people from Maine to California are expected to attend.

Another Disunion piece worth reading.  I couldn’t find room for the Ellet story in my podcast schedule, sadly, so I’m glad to see a good account written in the Times.  (Shelby Foote did a great job with it too, as you’d expect.)

The two met in mid-March, setting aside their differences and personalities, as each of them shared enormous dismay over the state of the Navy. Ellet convinced Stanton not just of the value of rams, but that if the Union didn’t build them, the Confederacy would. Stanton authorized Ellet to build and lead a ram fleet to be kept under Stanton’s personal control — not so much because Stanton wanted his own private navy, but because Welles wanted no part of the endeavor. It was a highly unusual arrangement, especially given Ellet’s lack of a military background.

Ellet moved efficiently, quickly assembling a fleet of five steamers, plus several smaller ones and coal barges. He outfitted the ships with as few guns as possible, as he wanted lightweight boats capable of achieving maximum ramming speed. Ellet also began to put together crews, preferring river men. He obtained permission from Stanton to bring his brother Alfred from his post as a captain in the 59th Illinois Infantry to be his second in command. Alfred joined him in May, bringing with him two more Ellets: Alfred’s son and nephew, Edward and John. By the beginning of June, several more of Ellet’s family would be on the fleet, including Ellet’s teenage son, Charles Rivers Ellet, who came on as a medical cadet on June 1 – his 19th birthday.

via The Rams of Memphis – NYTimes.com.

I don’t usually bother with articles about reenactors, but this guy’s got a terrific angle, and I love his enthusiasm for teaching. It’s a short article, and worth a read beyond just these interesting facts:

There were advantages to serving in the Navy during the Civil War.

Sailors had a higher survival rate than soldiers, in part because disease could be quarantined to one ship’s crew rather than allowed to spread throughout an Army camp, Dispenza said.

On the steam-powered Navy ships commonly used on rivers — uncertain winds made sails unreliable — sailors typically poured off drinking water from the steam condenser, he said. The boiler process killed bacteria in that water.

Sailors typically ate better than soldiers because they rarely outran their supply line, Dispenza said. If the crew needed food, they could go ashore and buy, steal or hunt what they needed.

The Civil War Navy also was racially integrated, Dispenza added. Slaves were considered illegally held by the South, so many surrendered to Union gunboats and served as enlisted sailors.

“As the war went on, there were black petty officers giving orders to white sailors,” Dispenza said, noting “that would not happen in the Army.”

The past days’ accounts of Confederate exiles sailing to safe harbours put me in a sailing mood, so here’s an unusual blog post for today.

I stumbled across this CD a few years ago while on a quest for Civil War music, and it’s one of my favourite period performances. The band describes themselves as,

“Living” is the key word, there – these guys sound like they’ve been issued double grog rations and the promise of some weekend shore leave in a bordello-lousy port. While Bobby Horton’s catalogue of songs is impressive, his singing leaves a lot to be desired. Such is not the case here. The shanties are rollicking and well-performed.

I didn’t recognise any of the titles except for Shenandoah and Drunken Sailor, but the Navy songs never got the kind of publicity that the Army’s marching songs did, so that’s understandable. The Mermaid is now a personal favourite, and I dare anyone to refrain from singing along to Jolly Grog.

The best part about writing this post is that I’ve just noticed the band has a whole series of other Civil War CDs. If I ever figure out how to make money off this site, I know how I’m blowing my first paycheque.