While not strictly Civil War related, this book – reviewed here in the NY Times – shows the legacy of at least one die-hard secessionist upon his daughters. This sounds like a fascinating family history.

These are just snapshots of a densely braided biography spanning eight decades, not counting the Lumpkins’ forebears and the rediscovery of the sisters’ work by late-20th-century feminists. The book also draws together the strands of Hall’s own career as a distinguished historian of Southern labor and an activist on behalf of women and civil rights.

Hall is a herculean researcher whose sources include security files she sued the Department of Justice to access. Her interviews with the elderly Lumpkins, and reflections on why and how she tracked the sisters over decades, lend an appealing journalistic and personal touch to what might otherwise be an unleavened diet of detailed scholarship.

Source: The Daughters of the Confederacy Who Turned Their Heritage to Political Ends – The New York Times

I noticed this story on the Smithsonian page today, and clicked kind of idly. A few seconds into the first linked video, I was hooked. Rhiannon Giddens and some of her fellow black women banjo players have created a moving and haunting CD of music inspired by and based on slave tunes.  It really is astonishing and worth a click. I encourage you to take a listen!

Giddens—a native of North Carolina and the lead singer and a founding member of the GRAMMY award-winning Carolina Chocolate Drops—researched the songs and haunting narratives of enslaved Africans. Native Daughters is a collaboration with three other African-American songwriters whose work interrogates history and, as Giddens writes in the album notes, shines “new light” on stories of “struggle, resistence and hope.”

“Rhiannon had brought in this handwritten music from the 1700s, the first slave melody ever annotated in the New World, and we started working on it, adding chords to it,” Powell says. “She was very close to the mic, and her voice was so unselfconscious and unassuming, her intention so pure, and things got very intense emotionally. We just had to keep it.”

The “camp followers” are an aspect of the war that don’t get a lot of press. Along with women offering different kinds of comfort (ahem), there were wives and – in this case – sometimes children accompanying their loved ones behind the armies. This is a pretty astonishing story!

“She got a notice from the commander of her husband’s troop. They were in Cape Girardeau, and he had fallen ill,” Ellis said. “They wanted her to come down there and nurse him back to health.”

It was unusual, Ellis said, but in those days there was no easy way of transporting soldiers who were sick or injured back home to their families. Sholley left her 3-year-old daughter with her mother, but put her 3-year-old son on the back of a horse with her and rode to Cape Girardeau to nurse her husband back to health.

“She did such a good job that the captain of the outfit asked her if she’d stay on and be a nurse for them,” Ellis said. “This was in the day when you didn’t have to have training to be a nurse, you just did the best you could. And so she did.”

How is Ford’s Theatre marking the sesquicentennial of Lincoln’s assassination?  It’s staging a play about Mary Lincoln.  Hope the Secret Service are keeping the Obamas far, far away from this one.

The moment is just one of many pathos-crammed sequences in “The Widow Lincoln,” the doleful historical monument of a play at Ford’s Theatre. Written by James Still (“The Heavens Are Hung in Black”) and directed by Stephen Rayne, this world premiere broods knowledgeably over the plight of Mary Todd Lincoln after the assassination of her husband, President Abraham Lincoln, at Ford’s Theatre in 1865. While fever-dream design and dramaturgy evoke the first lady’s mental health problems, there’s an aching universality to the production’s portrait of grief and bewilderment in the face of loss.

via ‘The Widow Lincoln’ at Ford’s Theatre shows a first lady in mourning – The Washington Post.

A short documentary on Vinnie Ream, the sculptor of Lincoln and lover of Tecumseh Sherman.  If you can ignore the overblown soundtrack, this is a neat insight into a young artist’s life.  The sculpture is lovely.

It was on this day in 1863 that Kate Chase married William Sprague.  It was the social event in Washington during the Civil War era, but there was no fairy tale ending for the beautiful politician’s daughter.  To listen to Kate’s story, click here. 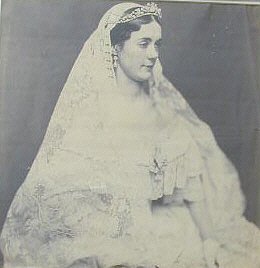 Life has conspired to keep me away from my blog and my podcasts.  I wanted to make an effort for this week’s, though, as I find the Sanitary Commission a fascinating topic in the Civil War.

The podcast can be downloaded here.

This was an auspicious date for Maryland advisors to President Lincoln!  Anna Ella Carroll died and Frank Blair was born on February 19th.  In the end, I had to pick between them, and I thought the Carroll story seemed interesting.  It’s hard to leave the powerful Blair family behind, though, so I’ve got it in mind to do a two-fer podcast on a future February 19th.  In the meantime, enjoy learning about Maryland’s Most Distinguished Lady.  You can find the podcast here.

I’m in over the wire this week, but hey – it’s still February 5th somewhere, so I’m counting it anyway!

This week, I celebrate the anniversary of The Battle Hymn of the Republic, published this day (or yesterday, if you want to get technical) in 1862.

You can download the podcast by visiting the February page and clicking on the MP3 link.

Disunion discusses a rare duck: Lady scientist of the 1860s, Martha Coston.  Nice to see that the Coston name remained tied to the product, though I wonder how many flare users were aware that the Coston in question wore petticoats?

Coston made her mark in history because she needed to survive, after her husband´s untimely death. At age 16, Coston eloped with the promising Boston scientist Benjamin Franklin Coston, who headed the Navy´s pyrotechnic laboratory. She had four children with him over the next five years. Apparently due to his work with toxic materials, Benjamin Coston died a somewhat mysterious death in 1848, leaving his 21-year-old widow and children nearly penniless.

Luckily, Martha Coston had followed her husband’s work, and knew that he had developed a revolutionary new signaling system: a wand signal that displayed three colors on a rotating rod. On the advice of Secretary of the Navy Isaac Toucey, Coston persuaded the home fleet to test the signal prototypes her husband had crafted. After testing it, Commodore Hiram Paulding wrote Coston that the idea was an excellent one.

But because her husband died in mid-development, he hadn’t left much behind in the way of schematics or formulas. Coston basically had to start from scratch to determine how to make the signal lights. Over many months Coston labored tirelessly to perfect the flare signals.

via Woman With Flare – NYTimes.com.