A friend posted this on Facebook, and I thought immediately of George McClellan. Unfortunately, with no updates to the blog since last week, I’ve become McClellan-ish myself. Apologies – long hours at the new job are keeping me from my reading.  I’d joke about hoping for a change in commanders, but the thought of a Burnside-ian period is even less appealing! 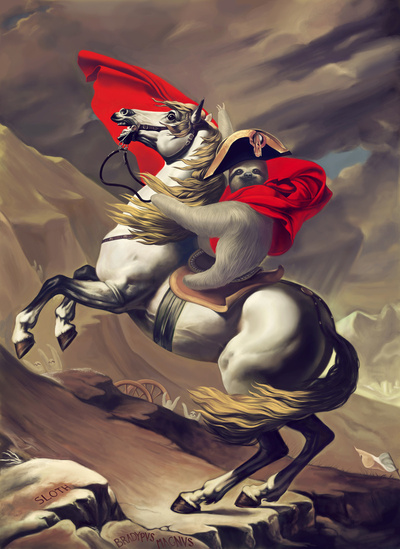 Another good Disunion article, this one offering a neat take on Lincoln’s visit to the Army of the Potomac after Antietam: Where Lincoln arrived worried that the troops would follow McClellan into revolt against Republican policies (to wit, the Preliminary Emancipation Proclamation), the support they showed him led him to believe he was both the de facto and de jure Commander-in-Chief.  McClellan’s ouster was assured from that point.

Hoping to bestir his inert commander, in early October Lincoln visited Antietam and the army he sarcastically referred to as “General McClellan’s bodyguard…”

After returning from Antietam, Lincoln was convinced that “I am now stronger with the Army of the Potomac than McClellan,” and he had Halleck order his general to “cross the Potomac and give battle to the enemy or drive him south.” But move the general would not. He bombarded Washington with excuses: exhausted troops; unknown terrain; a river too deep to cross or not deep enough to keep the Confederates from Washington; insufficient numbers of wagons; broken cannons; the enemy’s superior numbers; and too few boots and blankets. When he reported that his horses were “absolutely broken down from fatigue and want of flesh,” Lincoln displayed a rare flash of temper: “Will you pardon me for asking,” he telegraphed, “what the horses of your army have done since the battle of Antietam that fatigue anything?”

via A Terminal Case of the ‘Slows’ – NYTimes.com.

Dressed in his signature long black dress coat and instantly recognizable with his jet black hair and beard, President Abraham Lincoln and his lesser-known, albeit dapper, presidential challenger and former New Jersey governor, Gen. George McClellan, stood before a crowd of lunching history buffs as they verbally sparred over issues of national importance circa 1864

The Coalition of the Northwest Bergen Historical Organizations hosted the Oct. 18 event at the Brick House, offering a look back at history as they pondered, "What if Lincoln and McClellan had debated?".

In the wake of election-time debates, this sounds like it was a fun event. I would love to have seen Lincoln mop the floor with McClellan in debate. One imagines he’d be Nixonian in his levels of flop-sweat.

via In Wyckoff, a what if: Lincoln debates McClellan : page all – NorthJersey.com.

In researching one of my Podcast topics, I was directed to The Class of 1846

, by John C. Waugh, for a quote I needed to verify. As expected, our fabulous library system quickly delivered me a copy. I got the quote I needed, but a quick flip-through reveals a well-written, charming series of vignettes for some of the war’s most famous figures. (Most famous but not best-loved – this was the class of McClellan and Stonewall, remember.)

Sadly, I got caught up with Sam Watkins instead, and my hold is about to expire. I’ve added it to my wish list, though – my library doesn’t feel complete without it.

I sometimes feel sorry for McClellan, given how his reputation has suffered in the past 150 years. Then I remember that he earned this reputation, and I don’t feel sorry at all.

I found a Lincoln quote last night that was brand new to me, and I’m enjoying it immensely:

Gen. McClellan and I are to be photographed… if we can be still long enough. I feel Gen. M. should have no problem. – A. Lincoln 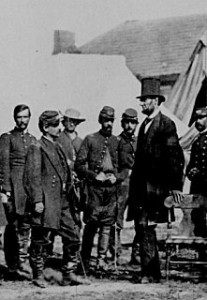 It appears he didn't.

… if only because he never advanced!

I found this fun dig at Little Mac in McSweeney’s:

CIVIL WAR GENERAL GEORGE B. MCCLELLAN ADDRESSES HIS TROOP OF TEN-YEAR-OLDS IN A GAME OF CAPTURE THE FLAG WHILE WAITING FOR HIS RETINUE OF HORSE-DRAWN CARRIAGES.

“My decisions have not always been popular, I know. But, children, I had specific reasons for ordering you not to chase those three Red players the last time they invaded. Did any of you want a repeat of the first time you tried that? The chaos? Sure, we caught two of their slower ones, but at what risk! Our defenses could have broken, my carriages had not yet arrived, and our proud Blue flag could be in enemy hands as we speak.”